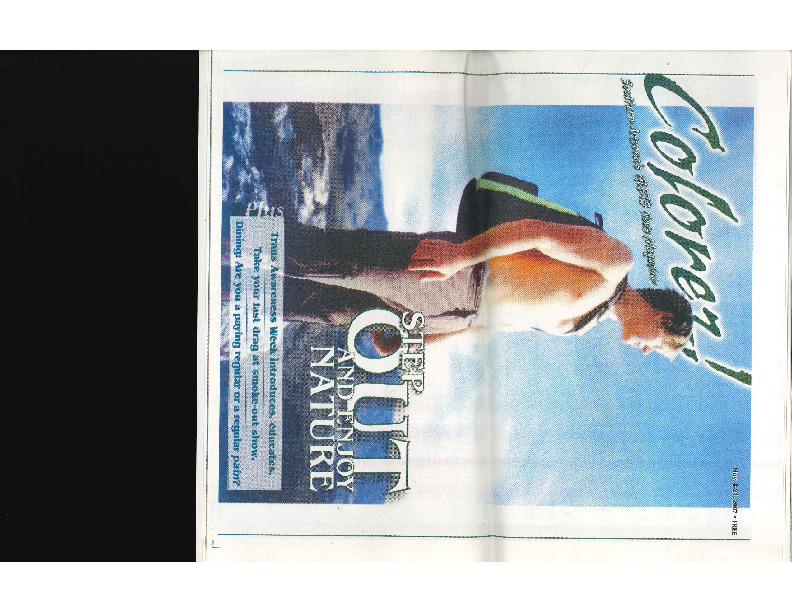 The entire November 8-21, 2007 edition of Colorez! is in the archive. Scanned are all the pages directly pertinent to the 2007 Tucson Transgender Awareness Week. The articles written within contain basic information about transgender identity, quotes from Oscar Jimenez (co-chair of the 2007 Awareness Week), and detailed descriptions of each event. There is a specific article about the Take Your Last Drag drag show, a drag show focused on the struggles of quitting smoking. There is an editorial by C. Michael Woodward, president of SAGA at the time, and he talked about his relationship with his mother as he transitioned from female to male and became more politically active in the LGBTQ community. In another article by Erin Russ, she discusses the vital role of the "T" in "LGBT", the advances of transgender rights in recent history, and a call to action for transgender people to be visible, loud, and active in the LGBT community. There are also photos underneath the title: "Trans awareness @ Wingspan," that I cannot figure out. If this newspaper was published before the events of the 2007 awareness week, then where are these pictures from? Would the pull pictures from the 2006 week? I do recognize Erin Russ in one picture, bottom row, third from the left. She is the individual on the right. Furthermore, the photos underneath "Is Everybody Happy???" on page 14 are also enigmatic. They may be connected to SAGA or the trans community as there are some clearly gender nonconforming people in the photos, but I am unable to tell how they connect to any specific events.

Colorez! is a newspaper particularly aimed at GLBT Southern Arizonans.